Typically conflict between people or teams is a symptom that indicates there something’s up. The tool I use for that situation is based conversation patterns. With this tool you will be able to come to a bigger picture on what is really going between people.

There is very strong assumption behind this tool need to be accepted first: people are not problems on their own. A behaviour may be a problem, environment, lack of skills or even belief may be problems, but not a human being.

In case of issues causing a conflict and lots of negative emotions people tend to express their statements in a specific way – they talk about others. Take a look on some real-life examples

I have interviewed lots of people and mostly I hear same messages: He is…, They should be…, She don’t… and so forth.

But what invariably surprise me most is that all of them seem to be true. Really! Spending whole day interviewing developers I came to conclusion – Damn, what the crap they deal with?. Same talking with business people I often think God, what a hopeless situation!. Every story I have heard make sense in its context.

I imagine this kind of communication something like that 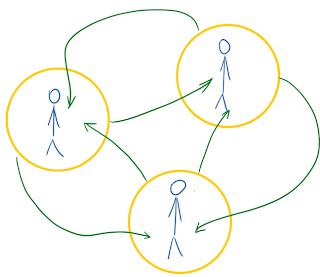 The more individuals I talk to, the more chaos appears in my mind. It is really hard to understand what is going on basing on those stories.

Then I finally understood – all those people talked about themselves. They expressed their needs and expectations, but they do it in very indirect way. Talking with the You-Message makes other people the source of our problems and there are only two solutions in that situation: fight them or leave them.

I followed this idea and I started using the Need Structure and Upward Generalization Pattern to lead my interlocutors to express their needs in the form of I-Message.

What are the I-Messages? These are statements where one expresses oneself, eg. I want…, I don’t…, I like to…, I am lack of…, I need….

Be careful, statement I want you to stop is You-Message like not the I-one like. With I-Message you express just only yourself and nothing more, this is critical.

So, this kind of communication I imagine something like that 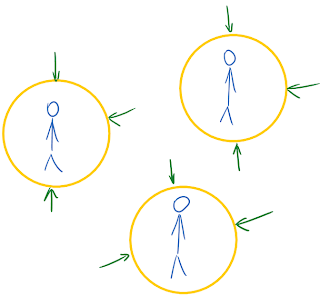 And some examples of transforming You- into I-.

Notice that I-Messages express needs very clearly and it may turn out that all individuals want same thing eg. to be kept informed.

Putting people stories in the form of I-Message introduces lots of order to the communicational chaos. It’s easier to see what is going on and what is needed.

Next I use Conversation Structure and Downward Specification Pattern to clarify acceptance cirteria of met needs and for negotiating the solution.